I’ve been doing a lot of work lately on the Jazz Age in New Zealand, and there are so many interesting facets to jazz outside of music and dances during the 1920s, but one of the aspects that I find the most fascinating is the concept of jazz emotions. In the 1920s jazz was a concept that was attached to just about everything including emotions, and the idea of jazz emotions was almost entirely negative, created by the moral evangelism movement.

Jazz in particular was on the moral evangelists hit list as the cause of so much that was wrong with post-war society. These organisations believed that all the post war ills could be cured by going back to a simpler time, however, as we all well know, it’s impossible to go back in time, and what one person or group’s idea about what constitutes a golden age is radically different from another. Specifically, jazz was perceived to be a modern malady, and actually diagnosable illness- jazzy nerves. This was excitement verging on hysteria, distracted attention, or any heighten emotional response that was not considered- in the parlance of the day, hygienic. As an aside, it should also be noted that many moral evangelists grouped psychology along with jazz in their vices lists.

The ’causes’ of jazzy nerves were thought of being directly related to modern life, but the reality is a little more complex. Jazz emotions and jazzy nerves can be also be linked to reactions to World War One. Young men and women returned from the war and were expected by their relatives and society at large to ‘be the same’ as they were when they went away. Women who had taken over necessary civilian jobs and for the first time enjoyed financial and personal independence were also expected to sacrifice this independence to allow society to return to pre-war norms. For men and women struggling to refit into society after their war experiences the idea of ‘getting back to normal’ was likely at once appealing and horrifying. Appealing in one sense, because of the trauma that they had experienced in the war zones- who wouldn’t want a peaceful, ‘simple’ life after that? But also horrifying for complex reasons: after the trauma of war, it would be very difficult to fit oneself back into society, in the way that their relatives and general society seemed to expect. People expected heroes to return not the traumatised men and women who were scarred physically and psychologically- they didn’t fit the narrative of winning the war.

However, there were also the adrenaline experiences where being so close to death makes you feel more alive, where people found unknown reserves of courage, and the idea of going back to a quiet, uneventful life after that was difficult and seemed banal in comparison. Then there were the more positive experiences of world travel- something that was an entirely new experience to many of the men and women. Going to London or Paris or the more exotic Cairo, Jerusalem, or Malta, were cosmopolitan experiences that would make anyone feel sophisticated- even in the middle of war. Coming back to ‘sleepy little’ New Zealand after the perceived glamour of overseas ports must have been jarring.

In the press the emotional aspects of jazz during the 1920s were channelled through morality panics and scandals. There were several aspects to these panics: music, dance, alcohol, drugs, sex, and gender. They usually centred on the cabaret and the dance hall, and in various combinations. In this post I’m just going to focus on drugs and alcohol

Although New Zealand did not have a prohibition against alcohol, dance halls, cabarets and other such venues were ‘dry’ meaning only non-alcoholic drinks could legally be consumed. However, this never stopped the patrons, and sometimes even the venues from bending or outright breaking this law. It was easy enough for men and women to discreetly carry in flasks or even bottles, and venues would were willing (for a small fee) to provide appropriate vessels from which to drink The Dixieland Cabaret in Auckland was in trouble several times over allowing its patrons to consume alcohol on the premises. And where there was one vice there were always more! 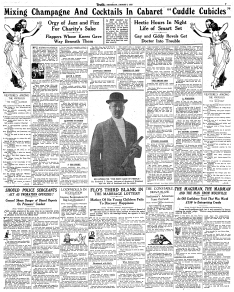 On the other hand, venue managers did tacitly disapprove of drugs. However, the managers of the high end cabarets mostly ignored patrons selling or procuring drugs on the premises so long as they were discreet. Dealers who wished to be seen as part of the smart set would regularly frequent cabarets, making it easy for patrons who wished to procure drugs to do so. Other dealers would frequent the environs of dance halls, but outside rather than inside, as lower middle class venues had stricter views on about their patrons’ behaviour than the high-end cabarets.

Until the late 1920s cocaine was still legal and available over the counter at chemists in New Zealand as a painkiller for toothaches, so while it was a fashionable drug, it was not one that needed less than legal means to procure. The illegal drugs of choice in the 1920s were cannabis and opium derived. Hashish, morphine, and the new drug on the block, heroin in particular were in demand.

The use of alcohol and drugs in the 1920s was complicated by the overuse of morphine in the treatment of war injuries. Men came back with addictions and had to find other ways of coping when morphine was not so readily available. Then there were the cases of shell shock, the generalised trauma of war, and the shock of returning to what now seemed like a fairly boring life. There were many reasons that men and women might have wished to partake in drugs and alcohol ranging from the more harmless end of the spectrum: for fun, to people who were trying to cope and seem normal to the rest of the world.

← NZMM- week four playlist
An Update on the Orange Hall →